skip to main | skip to sidebar

It's been a couple of months now and the arcade machine is running smoothly. Bella loves playing it and she has gotten quite good at a few games - Ladybug, Galaga 3, Ms. Pac-Man, Frogger, Jungle King and a few others. 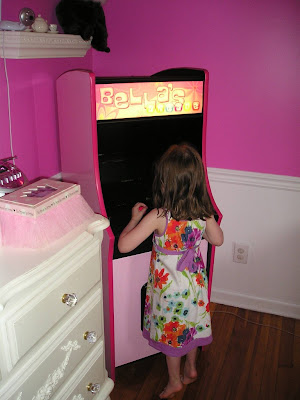 She is really having fun!
Posted by Some guy on the Internet at 6:00 AM 11 comments:

Well, it's been a very long time coming but over the weekend I managed to put Bella's Arcade in her room in the exact spot I originally envisioned it when I started. I had my dad's help lifting it up the stairs and I think I destroyed my back but it was worth it.

My daughter LOVES it and she is so excited to have an arcade machine of her own in her room - her reaction was thanks enough. 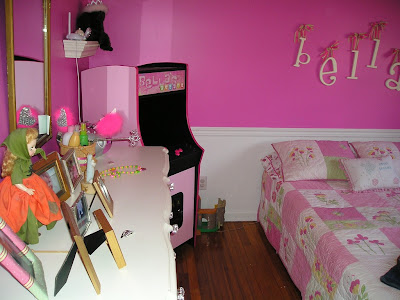 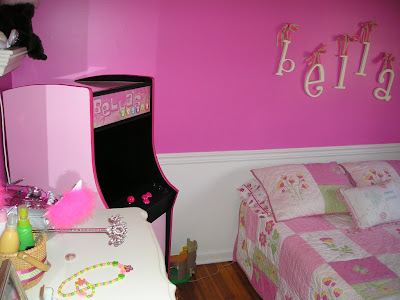 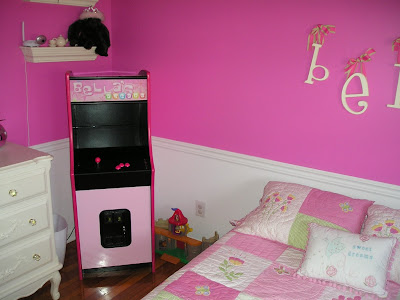 Here are a few more pics with the machine on. I have no idea how to take a picture without the flash that doesn't make the marquee look all washed out. I assure you it is beautiful - especially in a dark room! 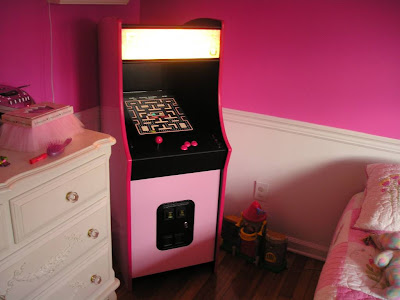 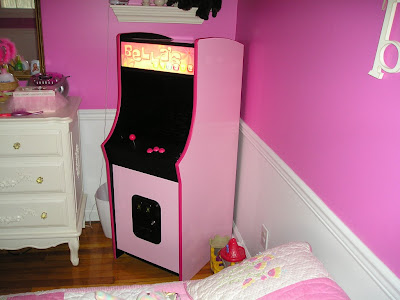 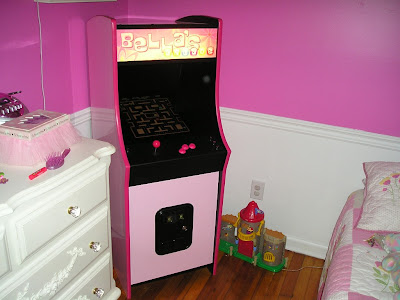 It fits the space perfectly and looks like a little toy. It is small (80% of original Ms. Pac-man size - about 50" tall) but it is perfect for an adult to sit in a chair and play. Bella still needs a step stool to reach the controls and see the screen!

A HUGE thanks to everyone over at BYOAC who provided me with all the great advice as I went along. I could not have done this by myself.

Posted by Some guy on the Internet at 6:00 AM 8 comments:

And now for your viewing pleasure...

I apologize for the poor quality of the video - I shot it in my basement and there are barely any lights down there but you get the idea. When I finally move the thing upstairs I'll be sure to post something a little nicer...with more light.

EDIT: I said Windows 98 in the video but it is clearly Windows XP. Since this video I've removed virtually all evidence that there is a computer running things (there is no splash screen and the task bar hides almost instantaneously).
Posted by Some guy on the Internet at 6:00 AM 7 comments:

Not a major update but something worth noting. I enlisted the help of waveryder over at BYOAC to make a few changes to my first MaLa layout. I wanted to change the font, the logo and add an instruction card. I think it came out great - check it out: 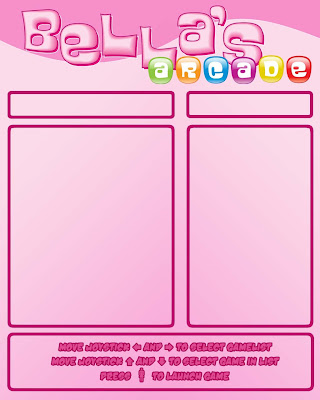 The name of the game list and the list itself appear on the left and the original manufacturer and year released along with a screenshot appear on the right.

It looks fantastic and it's easy to navigate!
Posted by Some guy on the Internet at 6:00 AM 1 comment:

I'm pretty much finished. The next post will be a small movie showing the cabinet in action (but not out of the basement, unfortunately). All I have left to do is:

That's it. As much fun as this project has been, I'm ready to move on to another one.
Posted by Some guy on the Internet at 6:00 AM 2 comments:

How could I forget about the coin door lights?!?!? No arcade machine is truly complete without lighting up the coin door return buttons. Shortly after getting the cabinet in a playable state, I got a message from theCoder over at BYOAC - he had put together two LEDs controlled by a circuit board and ran it all to a regular power plug. A few days later it arrived in the mail! All I had to do was plug it in and mount the lights behind the yellow coin return buttons. The only snag (if you could even call it that) was figuring out how to mount the LEDs so the light is evenly distributed. This really couldn't have been any easier and it looks great - especially when there no other lights in the room other than the marquee.

Unfortunately, the only pictures I have are of the installation and not the end result. Since the LEDs blink, there's no good way to show them off with a picture but I will make sure to highlight them when I film the 100% completed cabinet in action.

In this first picture you can see the green circuit board, the plug and the two white LEDs: 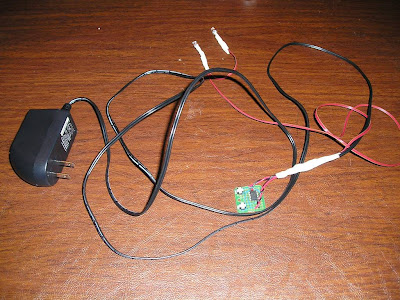 I used scotch tape (seriously) to secure both lights in place behind the coin return buttons in a place that seemed to evenly distribute the light. Pretty easy. 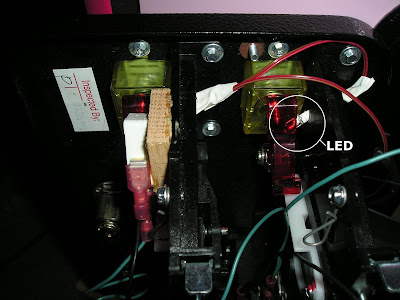 Thanks theCoder!!
Posted by Some guy on the Internet at 6:00 AM No comments:

OK, I think we can agree that this is getting a bit tedious, right? I'm forcing myself to cross the finish line within the next week. I am about to have a few free days to work on my new project and I want this one to be complete or else I fear, much like my first project, it never will be (I'll finish it eventually!). Most of the time I used to spend working on these things has been getting sucked away because of Rock Band. I'm addicted.

Anyway, I finally put the coin box in the cabinet. There's no magic here - I took a cardboard box and wrapped it in duct tape to give it some added strength. Then I printed out the marquee and stuck it to the front for show. The only consideration was making sure it was big enough to catch quarters/tokens from both coin mechs. Here it is: 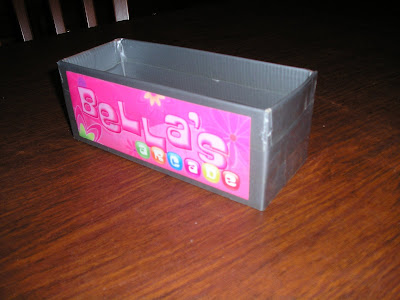 Try to contain yourselves.
Posted by Some guy on the Internet at 6:00 AM 7 comments:

Where To Find Parts